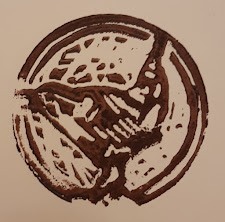 A piece prompted by the same little songbird that inspired the attached linocut, and tonight's (literally) inspiring livestreamed performance of "The Lost Words" by Spell Songs from the Natural History Museum, London. The concert is still free to view on the museum site, but is in aid of the museum’s Urban Nature Project. See www.nhm.ac.uk/spell-songs
My words pale beside the magical spells of Robert Macfarlane and my prints are crude in the extreme compared to Jackie Morris' wonderful watercolours, or indeed some of the children's artwork shown during the event, but they are my simple attempts to encapsulate some of wonder prompted by this wee bird, before it too becomes a lost word.
ps the lack of punctuation is deliberate. With my untrained ear I couldn't pick out a "grammar" to the wren's breathless song.
Reigning Rinn
Tiny brown king
crevice combing
Stridently singing
Before taking wing
Sing a song of strident joy
A ballad of the battle
Where you overwhelmed the eagle
Or a lament repenting
Your betrayal of the servant saint
Bewailing the revenge
Wreaked on your kind
Massacred more than
The permitted single day
for the making of a martyr
Your hapless song
Bringing ill fortune
To Stephen, yourself
And your persecutors
Indeed to all us
As careless subjects of
Our humble hedgerow king
If deprived of your singing
Selah