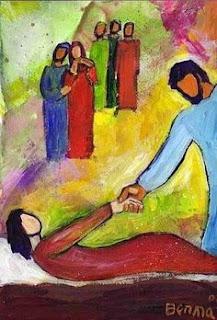 I wrote this 6 years ago as a way of looking at this, perhaps, overfamiliar story. The Revised Common Lectionary cycle has rolled around twice and here we are again, but re-reading both the original passage and my monologue in the light of recent events I thought it was worth another outing... So I used it again in this morning's livestreamed service froom the Agape and here I re-post it, mindful of those who continue to feel that they are down in the depths, enduring pain and loss without a miraculous resolution. You are not nameless, untouchable figures in the crowd... You are beloved...

I will exalt you, Lord,   for you lifted me out of the depths
and did not let my enemies gloat over me.
2 Lord my God, I called to you for help,   and you healed me.
3 You, Lord, brought me up from the realm of the dead;
you spared me from going down to the pit.

4 Sing the praises of the Lord, you his faithful people;   praise his holy name.
5 For his anger lasts only a moment,   but his favour lasts a lifetime;
weeping may stay for the night,   but rejoicing comes in the morning.

6 When I felt secure, I said,   ‘I shall never be shaken.’
7 Lord, when you favoured me,   you made my royal mountain[c] stand firm;
but when you hid your face,   I was dismayed.

11 You turned my wailing into dancing;
you removed my sackcloth and clothed me with joy,
12 that my heart may sing your praises and not be silent.
Lord my God, I will praise you for ever.

When Jesus had again crossed over by boat to the other side of the lake, a large crowd gathered round him while he was by the lake. 22 Then one of the synagogue leaders, named Jairus, came, and when he saw Jesus, he fell at his feet. 23 He pleaded earnestly with him, ‘My little daughter is dying. Please come and put your hands on her so that she will be healed and live.

I was down in the depths and time was of the essence. He was our last chance. We had tried everything else… but she just kept getting worse and worse… I didn’t go to him lightly… I’ve got my position to think of. As a leader in the synagogue you can’t give credence to these itinerant wonderworking rabbis… Most of them are charlatans. And whilst we had heard about all the amazing things this one had done since he had come down from the hill country, he still kept strange company and said perplexing things… Challenging the traditions that I was sworn to uphold. But by the time he came back across from the other side of the lake this morning I was ready to try anything… Because she’s my life, my only daughter, 12 years old and so full of the joys of life… It seems like only yesterday that her cries as a newborn had filled our home and melted my heart… I had rocked her to sleep and bounced her on my knee. Her first word was Abba… I was her Abba… she was my taleh katan… my little lamb… my Rachel… and it was my fingers she held onto when she’d taken her first steps…

And now here she was about to take her first steps into adulthood... a beautiful young woman, and out of nowhere illness had struck her down… It started as almost nothing, a sniffle, a headache. We put her to bed; and we figured she’d be up and about in no time, but no, she just kept getting worse, day after day, developing a hacking cough, sweating and complaining that light hurt her eyes. She couldn’t keep anything in her stomach… Not even her mother’s broth, and that is usually the cure for all ills... Then she slipped into a deep, deep sleep… and her breathing, laboured at first, became shallower and shallower…

I’d seen it before… I’m sure we all have… and there was no reason to think that we should be immune… The angel of death was just as likely to visit us as any other house… And we felt his shadow looming over us.  But I still prayed “Why my little lamb?” I cried out to God for mercy… Did he not understand how much I love her? I would have done anything to save her...

So as I said, by the time news came that this rabbi Jesus had come  back to the town this morning I was completely distracted… I fought my way through the crowds to the shore and threw myself in the dust at his feet… I didn’t care about my reputation, all I cared about was my little girl. I begged him to come with me and heal her if he could.

And he reached down and helped me up, simply saying “lead the way…”

But we had got no distance at all before he stopped dead in His tracks and asked “Who touched me?” It was ridiculous, I mean, there were people all around him, trying to get a piece of him, so there must have been hundreds who had “touched him”. But then a woman steps forward, and explains that she had reached out and touched just the hem of his garment, hoping that somehow this would heal her. She gabbled on saying that she’d suffered from bleeding for 12 years… And at that there was an intake of breath and a step back from most of the crowd around her…

A whole storm of emotions broke over me… I thought “How could she? She’s unclean. She shouldn’t even be out in public… Never mind going out deliberately to touch someone else…” And here she was stopping Jesus from getting to my little lamb before it was too late. I was appalled and angry…

But he just said to her “Go in peace; your faith has healed you”. Just like that! Faith. But she hadn’t been faithful. She had broken the law. And just at that moment my brother in law appeared, and I knew what he had to say before he opened his mouth.

‘Your daughter is dead, so don’t bother the teacher anymore.’

My world just dissolved…  I let an inhuman howl out of me… I was distraught… But in the same tone of voice he had used to that woman a moment before he said, “Don’t be afraid; she’ll be okay, just have faith.”

Again, faith… Of course I had faith… I am the leader of the synagogue… I have been faithful to God all my life… But right then I was angry at God for taking my daughter, angry at that woman for stopping us, angry at Jesus for spending time on a woman who had been unclean for the same time my innocent little lamb had lived…

I rushed back home… I didn’t care whether he was coming or not… I just had to get back. But he did come, and when he arrived he chased off all those who were wailing and weeping inside the house. ‘Stop wailing,’ he said. ‘She is not dead but asleep.’ He went in to her bedroom with my wife and I and a couple of his followers… and, right enough, she did look just as if she was sleeping… But I’ve seen that before and it was no comfort at all, But then he just took her by the hand and said, “Child, get up!” and her eyes opened, and she smiled that smile that I always thought was only for me… and she sat up in bed! He then just turned to my wife, and said “You’d better get that girl something to eat!” She rushed off saying “I’ve got just the thing… some broth… would you like some yourself rabbi?”

But he’d gone again, with his followers. I didn’t even get the chance to say thank you… But at least I got the chance to tell my little lamb once more how much I love her.