The Way to the Father 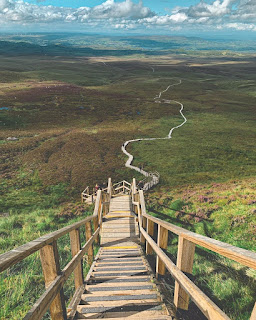 Recently I've been re-reading Thomas à Kempis' "Imitation of Christ". Well, I say re-teading, but this is actually the first time I ever got all the way to the end. It is one of those works that starts well but always lost me about half way through - partly that was down to format, because in book 3 he adopts an imagined dialogue between himself as the disciple and Christ. Personally I have always found that somewhat disingenuous and arrogant in serious devotional literature, although it is essentially the same idea behind the John L. Bell & Graham Maule "Jesus/Peter" dialogues that I admire and frequently seek to emulate. But there is something more obviously contrived, anachronistic and self-mocking about those that prevents them seeming like a simulacrum of canonical scripture. With à Kempis that is not necessarily the case, and indeed his famous comment on John 14: 6, rendered in one version as

has become almost as well known as the original words of Jesus, although perhaps not by wide readership of à Kempis but because of the simple popular chorus based on it.

But as I read that section of the book within the context of the overarching ethos encapsulated I'm the title "The Imitation of Christ" it did help me to get a different understanding of that verse that has historically been used in such a brutally exclusive fashion. And Jesus clearly is being exclusive here, but when understood in the light of the way he walked, the truth he told and the life he lived, and who he lived it with, then perhaps those excluded (or excluding themselves be their exclusiveness) are not the ones we traditionally expect. Perhaps, yet again we find ourselves as the older brother standing raging in the field rather than coming in to join the party with our Father and wastrel of a brother because we cannot bear to abandon our self-righteousness and embrace grace...

Anyway, that's a long and rambling introduction to this short piece where I abandon my reticence to put words (some mine, some à Kempis) into the mouth of Christ.

I am the Way, the Truth, and the Life.
No one comes to the Father but by me.
Not by you
and your narrow, exclusive, elitist dogma,
But by me
My way, my truth, my life.
Without my Way there will be no progress;
But some of you are happy where you are.
Without my Truth there will be no understanding;
But some of you thrive on confusion and lies.
Without my Life there will be no living,
Just purposeless existence –
Eating, drinking and being miserable
Because tomorrow – or the next day
You die.
And some of you profit from that
High priests of religions
That promise to fill the aching void
Purveyors of material and spiritual produce
That always leaves consumers
Longing for more,
Ready to sell their souls
For something more than this;
Sellers of saccharine spirituality -
Sweet tasting but not life sustaining.
Instead I offer you myself;
Nothing more, but nothing less:
And through me a reintroduction
To our waiting Father...