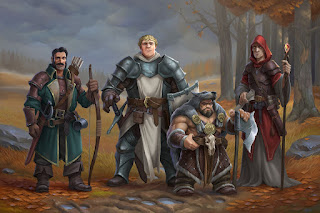 Today I visited one of BCM's Sheltered Housing Projects for younger people, Tafelta Rise in Magherafelt, and was encouraged again by the hard work, compassion and creativity Richard Docherty and his team there, supported by innumerable statutory, charitable and community partners. This is only one of 4 such projects we run and I am so proud of the work of all of the staff that work in them under the inspirational leadership of our Head of Residential Services, Lois Payam.
But last week, ironically the day after World Mental Health Day, I was party to a series of conversations where the wellbeing of one of our young service users was being looked after, not only by our fabulous staff, but a group of online gamers he had been engaging with. These gamers demonstrated a perception, compassion and determination to get help for their fellow gamer that I have seldom seen in churches or flesh and blood groups of friends, never mind a group of people who had never met, perhaps living alone in many cases, in disparate places, separated by seas and oceans! I don't know what game they played together, be it one of the many fantasy ones as I surmise here, a "shoot-em-up" or some sci-fi thing... I am not a gamer. If I went down that particular rabbit hole I may never emerge... But this is my tribute to that caring band...
(ps. The Night Goblin referred to is a tribute to a flesh and blood friend who historically had a long term existence as one of these creatures, reputedly...)
An improbable band
Of virtual foes
And fantasy friends
Unite with a common goal.

They suspend their conflict
And online trash talk,
Gloating as each other dies,
To rise again repeatedly,

Because one of their number
Seems to have resolved
To leave the game and log off
Permanently.

He had no worthwhile quest
To pursue in the unvirtual world;
No dragons to slay
Save the ones in his head.

And so this unlikely fellowship
Of hobbit, orc and night-goblin,
Vampire, dwarf and wise wizard
Sought out this troubled traveller.

Knowing only each other’s handles
They emerged from clichéd remoteness
Worried for the wellbeing
Of their friend’s fleshy avatar.

Against the backdrop of pandemic
Of both virus and mental illness
This was, for me, a hope-filled
Sign of distant socialising.
Selah

September 26, 2020
Reading again the story of Joshua and the walls of Jericho in preparation for our current Bible Study on "Whole Life Worship" and I am struck again by the difficulty, and importance, of connecting such stories with the everyday experience of people... and indeed myself. Years ago a friend wrote a poem that said "Oh to be in shining armour at the photocopier..." More that a quarter of a century later those words still resonate with me... Ask me clearly  To do the impossible  And I will happily attempt it. Separate waters  With a walking stick To escape pursuing foes. Blow my trumpet  To demolish the impregnable Despite mocking from the ramparts. Face a fearsome giant With a few pebbles, faith And not so youthful arrogance. Sit amongst lions Rather than desert you, Anticipating our enemies’ demise. Let me be a hero Striding across scripture Your words in my ears and mouth. Yes Lord, please Deliver me, not from evil But the undifferentiated mundane; The daily demands
1 comment
Read more