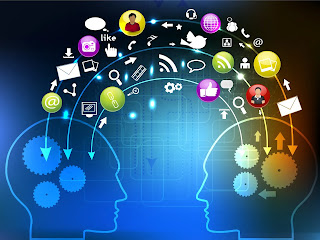 In some ways this follows directly on from my previous piece. The past 18 months has been a strange time for all of us, and I for one have been repeatedly grateful for the technology which has made the global pandemic and the measures that had to be taken to counter it, not the complete disaster that the same happening might have been had the earlier outbreaks of swineflu or SARS gone global. There have even been aspects of our switch to "online" engagement that were positive and will probably be here to stay. But even for someone as anti-social as me, there are significant downsides and possible long-term consequences. So with the resumption of "working from home" in the ROI and the moral vacuum that is Mark Zuckerberg hijacking the emerging metaverse with his Bakebook rebrand I have significant concerns that bubble up in this stream of consciousness...
Tech(nology)
The tech knowledge
That takes us to places
We could only imagine
In science fiction
When I were young.
It enables us to do
More than we could hope
(and was unhealthy)
A decade ago.
Enables us to zoom
Across borders and oceans
Without need of car or train,
Or plane or passport, of any kind;
To team up with others
Without risk to them or us;
Without the need
For formal attire,
At least from the desk down;
To communicate and collaborate,
(Cats and other pets permitting)
With those previously beyond
The reach of our commute or budget;
Sharing documents more safely
Than via light-jumping,
Curb-hopping cycle couriers,
Using electrons, infinitely faster
Than their leather-clad,
Petrol-powered cousins.

But what is lost in transmission
From in-person to virtual,
From the material to the meta?
Are sight and sound
The only senses
We require today?
What about the smells
That transport you
Across space and time to when
Zoom was an ice lolly
And teams were what
You were picked last for
In the school playground?
Or what about the touch
Of a (suitably sanitised)
Handshake when the deal is done?
Or the, thoroughly unprofessional
But sometimes essential,
Hug, or at least hand on shoulder
To remind you that
you are not and never will be
On your own, even when
anti-socially distanced?
Or the shared taste
Of bad coffee, weak tea
And bland biscuits,
Before the shared business,
That may at times also
leave a bad taste in the mouth,
But at least you “sense”
It’s a similar taste to those
Around the shared table.
And of course the experts
Tell us that we actually have
More senses than the five
We had when I was young,
Yet becoming more aware
Of the senses we have
We have rendered most of them,
And a fair few people,
Redundant.

Plusses and minuses
To be considered
In the balance sheet
Of this timorous new world
That has such challenges in it.
But let’s not forget the people
In this virally accelerated
Technological tempest.
Let’s be sensitive
To what cannot be quantified
In spreadsheets and graphs;
Perhaps can’t even be
Accessed by however many
Senses we have,
But, rather, is intangibly
Human(e).
Selah